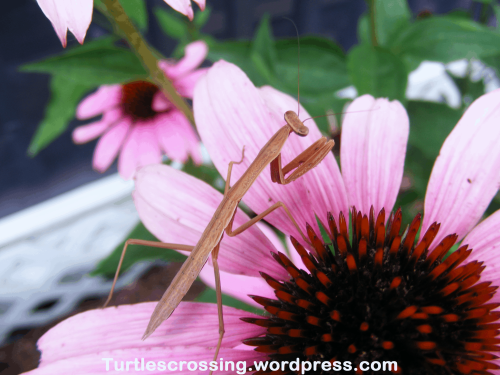 One very warm day this summer I was lucky enough to observe a praying mantis (Mantis religiosa) in my back butterfly garden. I watched  attentively for some time as  the insect made himself at home within the stems of the tall perennials. This one was relatively small as a mantid goes, measuring only a few inches at most.  I remember seeing some as a kid that were much, much larger, but I suppose it could just have easily been that I was much smaller. However, I do still remember my amazement when, as a kid, I first observed one turn its head and look back directly over its shoulder at me. Good thing I was not easily spooked. But enough of my detour into childhood memories.

This day, after posing for some pictures on this flowery brightly colored background, this mantis climbed down within the brown speckled stems of my Echinacea and Eupatorium and “became one” with its surroundings. The shape of the insect’s body and its coloration provided the perfect camouflage.

It then proceeded to perch in that position with little movement for quite some time lying in wait for some unsuspecting victim to wander into its attack zone. After about 2 hours (no, I did not sit there watching it for the entire time as there is way too much work to be done in my garden) I was rewarded with the opportunity to watch as a red milkweed beetle rambled just a little too close. In a lightning fast movement the mantis snatched the beetle, grasping it with its spiked forelegs.

Since the praying mantis is an insect that feeds on living food it held the struggling beetle securely in its legs and wasted no time in taking its first bite. It brought back memories of those bad horror movies on Hallowe’en eve (you know, the ones that used to air annual on WLVI Ch. 56?). Watching the display it was quite clear that the mantis is quite the fearsome hunter and could be, possibly, the perfect predator.

Some interesting facts about the praying mantis:

2 thoughts on “The Perfect Predator”

All About Turtles Crossing